This was to be Mongo’s time of death. BUT WE FLIPPED THE SCRIPT. Instead of it being his last day on Earth, it was the first day of a bright new beginning. 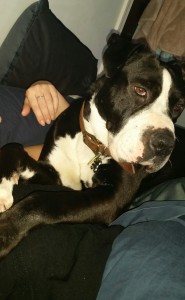 Mongo, now named Asher, which means happy, blessed, and fortunate, is a large, goofy looking black & white Pit Bull Mix. He was scheduled for euthanasia at ACCT Philly, which is Philadelphia’s only intake shelter for strays and owner surrenders. It is much too small with far too few resources for the number of dogs & cats they deal with.

Asher was picked up as a stray in the middle of the night on January 11. He was so nervous and scared that shelter employees couldn’t even initially get him out of his kennel to examine him. He was underweight with a wound present on his hip. He was never claimed. We don’t know anything about his life before Jan. 11, but let’s assume it wasn’t anything stellar.

On Jan. 19, Asher was adopted. I’m sure he was thrilled to be out of there and that the shelter staff and volunteers were excited for him. It should have been a good, fresh start – not so. Asher was returned 1/21 and found himself in a much worse situation. His adopter had made the mistake of putting Asher and her other dog (who after 2 days, obviously barely knew each other) together in a room and gave them bones to chew. When Asher approached her dog, she guarded her bone and a fight ensued. The woman intervened and was bitten in the process. There are a number of things that were done incorrectly and set Asher up for failure. He was returned on a 10 day bite quarantine. At some point, euthanasia was scheduled for 20minutes after his quarantine expired.

During his quarantine, Asher gained an advocate in volunteer, Brenda, as part of ACCT’s Pen Pals program. She spent time with him, gave him love and affection, and as his last day grew ever closer, she fought hard on his behalf.

For all that it’s lacking, ACCT does have an amazing network of employees, volunteers, fosters, and rescue partners. And when a dog with potential has been given a raw deal, no one fights harder than the volunteers. Blasts are put out on social media constantly. “Like” the Philly Urgents Page on Facebook and you’ll see what I’m talking about. Requests to Share urgent animals are posted because, although you may not be interested, someone who sees a shared post could be.

Asher was given the opportunity to leave the minute his quarantine expired, but could only be pulled by a Rescue – no ACCT fosters and no adopters. In the days leading up to Jan. 31, I followed the posts and hoped to see word he had rescue lined up. It wasn’t coming. I felt drawn to him, mostly because he looks a lot like my Josey girl, who passed away in July. I also identify with someone/something being written off, discarded and unloved when they’re inherently good and have so much love to give. I’ve experienced this – it isn’t fun. I reached out to the shelter and asked to adopt Asher. I received this reply: “Rescue only”.

Finally, midday 1/31, a rescue stepped up – Sammi’s Voice Pit Bull Rescue out of S. Jersey. But they’re foster based and had no foster available. As soon as I saw this update, I reached out and offered. I was asked to submit an online foster application to the rescue. Mind you, at this point I am in Lancaster for my daughter’s dance competition and am hiding out in the only area that I could pick up WiFi as she got ready to perform. Shortly thereafter, I was approved as his foster. Next issue: his time was up before I could get back. Now we needed an additional volunteer to pull him and hang onto him for a few hours. Another angel – new volunteer, Brittany – came through on that and, FINALLY, Asher could be considered safe. Hearing that evening that he was out the door without incident was a big relief!

Meeting Asher was beyond heartwarming. When we picked him up, Emmy barely got through the door when he stood to hug her and she immediately started to cry. Allie 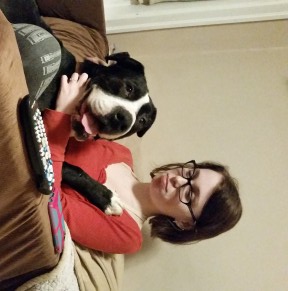 received a hug as soon as we got home as well. Things seemed to be off to a great start – until we realized he has severe separation anxiety. He would panic the minute we were out of his sight. This is a dog who will try to break out of any confined space to not be left alone.

We’re one week in and I’m not gonna lie – this is HARD. But when that big, beautiful boy sits and gazes at me, I swear I can practically see through to his soul. And it’s asking me to please hang in there, to please not be another someone who’s given up on him. That he’s doing his best. And we are going to continue to do ours. I share this story to show what these dogs are being put through and that they desperately need help. There are so many other ways you can help if fostering or adopting is not an option. At the very least, please advocate for shelter animals. Share posts you see of dogs and cats needing homes. Encourage people to stay far, far away from anything remotely resembling a puppy mill, pet store, or online ordering of a pet. You can donate, transport to rescues, and help with much needed supplies as well.

People have asked me if ACCT really sticks to the timestamps (posted time of death). The answer is YES. They are not designed to pull on people’s heartstrings; they are not an empty threat. It is difficult for me to wrap my brain around the numbers of dogs and cats that are put to sleep in the city of Philadelphia, let alone across the country, each year. It’s an epidemic that, unfortunately, has no quick fix. There will always be too many people who consider pets to be disposable. There will always be too many monsters in our society abusing & neglecting animals. There will always be too many people who don’t think about a pet being a precious life that deserves a lifetime commitment. I have been doing what little bits I can in animal rescue for many years. I can’t describe the feeling of helping an animal in need. It does make my heart ache thinking about all those who aren’t so lucky. Living things without a say that didn’t ask for the cr 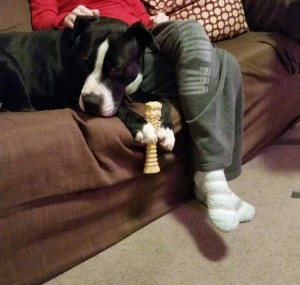 appy hand they were dealt. But what I would say to every animal lover is that EVERY little bit helps. Be someone who makes a difference, however small. You will not regret it.

We are looking for more pet sitters to join our amazing team! Click here to apply
+ +
Loading Comments...