The Story of Rafa

Rafa wasn’t always known as Rafa.  The day that he was carelessly dropped off at ACCT like a piece of unwanted trash, he was known as Benji.  ACCT is Philadelphia’s only intake facility for all strays and owner surrenders.  Due to very limited space, ACCT is still a high kill facility, euthanizing many dogs and cats every year when they run out of room.  Unfortunately, Philadelphia is not yet a no-kill city.  The day Benji was brought in, I was in the waiting room to pick up  a litter of foster kittens from neuter surgery.  I looked at Benji, noticing that he seemed to be a purebred Wheaten Terrier.  He was very dirty but otherwise looked to be in good condition.  It occurred to me that my client Sherry, who adopted her Wheaten from a Wheaten rescue, may be able to help me with this dog.  To be honest, this dog’s life probably was not in imminent danger.  He most likely would have been pulled by a rescue.  However, the shelter is always full, predominantly of Pit Bulls.  As soon as he went back to a run, he’d be taking the spot of a Pit Bull that would then lose his life for no good reason.  I just couldn’t let it happen.  I jumped up and explained the situation to Benji’s owner as she was handing over her $10 – the only requirement for surrendering an animal.  I asked her why she was giving him up and she said that her roommate had moved, left him behind, and she wasn’t really a dog person.  I thought that I’d give her the benefit of the doubt and that maybe the responsibility of giving up on this dog didn’t fall on her.  I asked her if she would hold off a minute and let me call Sherry.  She asked “Will it take long?  I need to get going”.  Uh, really?  I spoke through my tongue that I was physically biting and told her that “No, it shouldn’t”.

My call with Sherry went well.  I knew I could count on her.  She said that I could bring Benji to her and she would get the call put in to the Wheaten Rescue.  I was very relieved.  I told this woman the good news and asked her for some info about him as I walked her to her car.  And surprise, surprise, who’s waiting in the car in the parking lot but the roommate that had supposedly moved and left him behind!  I know this because she readily admitted that she was the dog’s owner as we spoke.  Our brief conversation made it clear that he simply wasn’t wanted anymore.  I just couldn’t wrap my brain around it, as he was really seeming like a great dog.  They could not come up with any issues, such as they couldn’t afford him, no really rough situation that they were dealing with such as illness – nothing.  I had to just turn around and walk away.  I had to be OK with the fact that I must have been there then for a reason.

My daughter, Emily, was with me and she put Benji in the backseat with her.  He was perfect with her and on the car ride.  When we got to Sherry’s, Benji met Sherry’s Wheaten, Yogi.  Benji was quiet but polite.  Benji spent a wonderful few days with Sherry.  In that time she got him groomed and took him to the vet.  He was looking spiffy and feeling good.  He started meeting the neighbors, both human and canine.  He played with Taylor the Standard Poodle and Rudy the Cockapoo, both dogs in Bryn Mawr that we care for regularly.  He also met a neighbor around the corner in Gladwyne, who had lost their old Wheaten, Percy, a couple years prior.  And it was love at first sight.

Ginny, her husband, and their college aged son adopted Benji.  That day, Benji became Rafa, after the tennis player Rafael Nadal.  I was shocked and overjoyed.  I couldn’t believe how well this had turned out.  Not only didn’t he have to go to the rescue, but he was staying in the area.  I was so appreciative of all Sherry did for him.  When I thought it couldn’t get any better, it did.  Ginny hired Creature Comforts for daily dog walking.  We have the pleasure of seeing him 4 days a week and John just had the fun job of house sitting for a week with him over Christmas.  Rafa has a wonderful life consisting of an extremely loving, devoted family, a home in Gladwyne, and a home in Vermont!  Not bad for a dog dumped off at the pound in Philly.

This truly was my personal Feel Good Story of 2011.  Animal rescuers suffer A LOT of heartbreak.  We need things like this to happen so we can keep doing what we do and we soak it up and relish it when it does.  Unfortunately, many dogs given up by their owners are not as lucky as Rafa.  I wish everyone could understand that dogs and cats are not disposable pieces of property, but a commitment for their lifetime.  Creature Comforts is always here to help those who are dedicated to their pets by giving them the best possible care when their parents can’t personally be there. 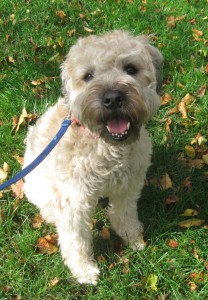 We are looking for more pet sitters to join our amazing team! Click here to apply
+ +
Loading Comments...